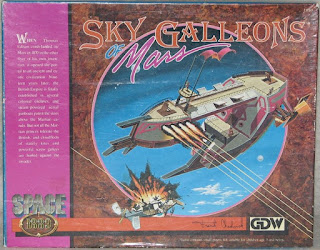 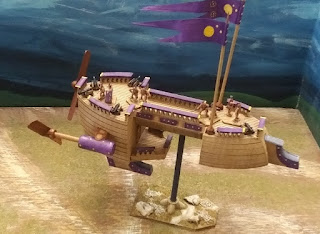 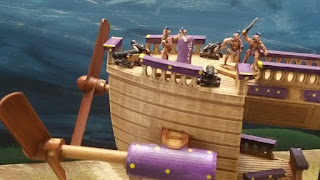 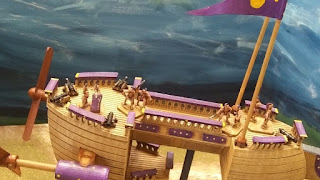 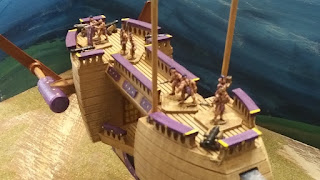 Finally World War One in 28mm!

Seems like it's been years that I've been painting WWI French but still no game. But this year I picked up the Blood and Valor rules, because a) I likes Blood and Plunder and b) because others were also about to jump in and buy figs for the period. Of course I had enough figs but still no terrain. So I took and old demo table for the desert and gave it a quick rework. Came up with some not so correct barbwire to get me by for now and now I'm ready to play! 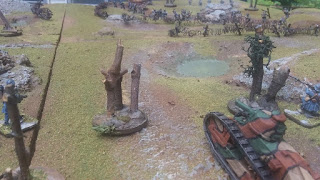 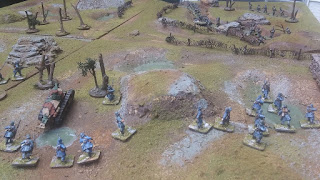 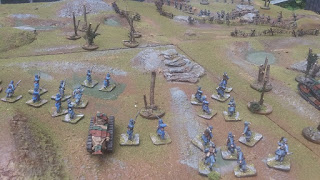 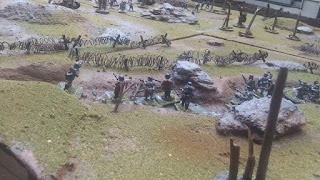 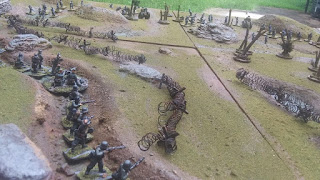 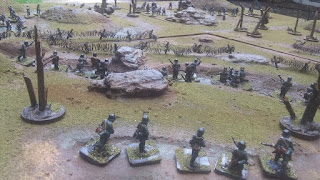 Galleys Cannon and Glory! with 15mm Galleys and Crews

Been years but I dusted off my 15mm handmade renaissance galleys and played Galleys Cannon and Glory.
Let the measurements the same and everything went quite well.
The guys down at Discover Games really seemed to enjoy it and have me motivated to build some more. Have to open up the shipyard. 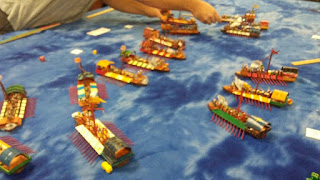 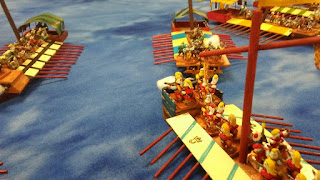 Finally back and so is Blucher! 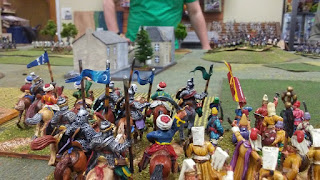 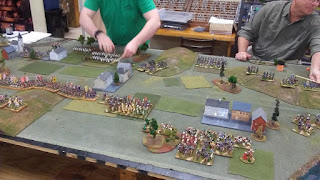 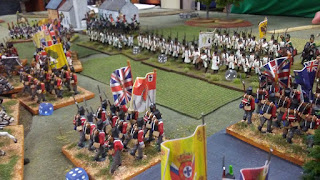 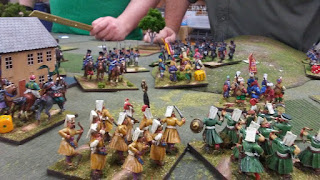 Been quite a while since my last post but life is what it is.
So this year we've slowly managed to get together a group of Blucher players.
Todays battle was a straight points game pitting some 350 points of British and Turks ve 350 points of Austrians, Prussians and a few token French. Unlike last month's Friedland game todays game was a chance to let everyone show off their newly painted figs.
We also did a bit of work on the terrain to spruce up the table.

I must apologize for the too many pics of my Ottomans but it is a rare moment when I get to use them.
Posted by Mike at 5:21 PM No comments:

The Joy of Selection 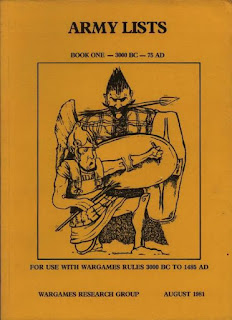 One of the great pleasures of Wargaming is the initial planning stage. At this point you and your friends have decided to take the plunge into a new period or genre. So now comes the time to decide which force to raise for your tabletop battles. But how do you decide? What are your likes and dislikes? You certainly want to put a little thought into it before spending the $$$ and time.

Here are some points to ponder as you thumb through your potential armies. I've picked all these  over the years.

A: Size of army.
Do you like them big or small? DO you giggle with joy as you swarm over your enemy with wave after wave of fighting troops. Examples: Zulus, Orcs, Russians. Big armies can be quite fun though the downside for some can be the time and $ investment.
Or is your style commanding only the very best elite force. Small Elite armies on the other hand usually take less time and $. Unless you're trying to paint Harlequins, Shessh! But with so many fewer troops you have to play cautiously, one wrong step and you can loose a quarter or your army. Examples, Zulu War British, Israelis, US Vietnam.

B:" I want whatever is Bob's Nemisis"
This is where you have a fun rival and choose to raise a force that will always tangle with him/her.
My brother and I would always raise opposing forces,  Really just an excuse to taunt your enemy. Easily leads to campaigns.

C: Jack of all Trades or  Specialist.
A Jack of all Trades army is pretty good at everything but not great at anything. A good army for beginners,
Romans and Space Marines come to mind, you can take a beating and keep ticking  A Specialist army often requires a bit of handling because it tends to only be good, but very good, at one or two things. If you don't yet have the feel for the army you can easily be derailed in one or two turns. Eldar, Byzantines, Turks. I once ran a Turkish army at a convention tournament and did quite well in the first games constantly maneuvering and harassing, But by late that evening, I was a bit fatigued and started to forget some key movements, and soon loss the tourney as a result.

D: Painting dificulty
Well this is pretty self-explanatory. If painting can be a chore then you may want to pick a pretty easy army to paint. Space Marines, Russians. If you love painting and the challenge then may I suggest Harlequins, Samurai,  and anything with Camouflage!

E: What's Missing
Sometimes you look at all the armies being raised or played and you
ask 'what's missing' and then raise it. This gives you something different and also
fills in a vacuum. Sometimes you may find yourself the only player willing to take on the
chore of raising a certain army that is viewed as weak in play. For me it was Ottomans in the Napoleonic Wars. Or perhaps an all Goblin army in Warhammer. Always fun to play an army that no one expects to win, because if you do, oh the joy of tweaking your opponents!

F: Love the History or the Fluff.
If you really are into the Fluff or History of a particular army then by all means
raise it! Nothing gets you through a dryspell of painting like a good read.

Saturday we gathered for our Annual Magnesia battle. Okay, it's really not suppose to be our only Ancients battle during the year  but somehow it always seems to work out that way. This year Steven joined  the ranks of the Seleucid Empire bringing more pikes and skirmishers. While Charlie and Jonathon helped Andrew to field his quite substantual Republican army.

Our rules of choice are Clash of Empires, which is essentially WArhammer Ancients with some much needed common sense adjustments. Now I know that in this age of ' fast play' rules Clash may seem a bit cumbersome but it really is a delight to work up your army and does give a lot of flavor to the various forces.
No 'my unit is just like yours except I roll 8 dice instead of 7'.

So this year we were up to 6000 points per side,
Which for the Seleucids ment some 6 pikes blocks, a Thracian warband, 3 cataphracts , Skythians, eastern bows, Thoralites, elephant, chariots, etc.
We faced some 3 legions with some beautiful Numidian and Spanish cav by Victrix added just this year, We done Andrew.

What follows is a picture of each end turn on our 12x5 foot table.
It was all a question of whether the Seleucid right would break before the Seleucid left engaged, 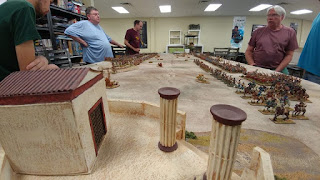 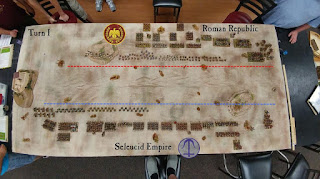 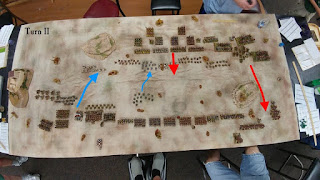 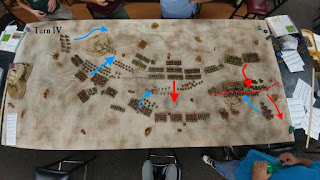 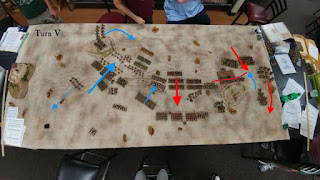 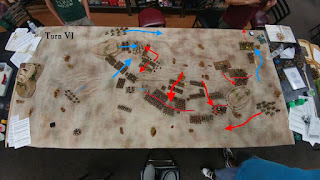 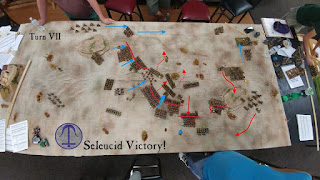 So Sunday we all gathered to play our biggest Alpha Strike battle yet, 232 Mechs! This time the forces
of Davion were arrayed against an Alliance of Liao and Marik.
Pat, Eli, Rob and myself were joined by Steven with  Marik and Alex with his Liao  forces.
The scenario aim was to capture the center urban areas, There were also points for capturing the enemy bases on the edge of the table, points for whichever side took out the most mechs and points deducted for losing entire lances.
To keep the game flowing we moved entire companies at a time, we also added our event cards which allowed for artillery, air strikes, sabotage etc, things that happen in the novels but are hard to implement.
The game was a very close, with House LuSann keeping at long range with the heaver forces of the Davion Guard. In the center it was an all out brutal battle with Marik Militia taking Wolf's dragoons, no quarter asked an none given! While on the flank the Confederation Cav went up against the heavy Avalon Hussars, the Liao forces played a deadly game of cat and mouse and took great casualties but managed to keep a toehold on the city.
In the end it was a very narrow Marik/Liao victory,  though Davion held more of the urban areas they had taken more casualties as well as whole lances being destroyed.